You can do it: Self-talk interventions can help improve a player’s performance.

Editor’s note: This article is the first in a series focused on communicating findings from peer-reviewed sports psychology research to the masses. At the end of each post, you can find additional information, including a link to the original research article.


Self-talk is exactly what is sounds like. Come on, you can do this. You’ve done this before, you’ve got this. Self-talk strategies rely on the idea that when placed in a competitive situation, people will respond appropriately, and thus improve their performance. As it turns out, research supports this idea: a 2011 meta-analysis (a study of that combines the results of prior studies on the same topic) showed that self-talk can increase learning and performance in sports. Additionally, self-talk seems to be more effective for tasks requiring precision and accuracy than strength and endurance — think throwing a changeup on the outside corner vs. running a 10k without training.

Based on these findings, researchers have developed brief interventions that athletes can use to enhance the effectiveness of self-talk. The issue with much of the research on these interventions, however, is that it has consisted mainly of field and lab experiments that were not conducted in competitive situations. Simply, how do we know if self-talk is effective unless we study it in the contexts in which athletes will be implementing it?

To begin addressing this problem, Dr. Antonis Hatzigeorgiadis and colleagues at University of Thessaly conducted a study examining the effectiveness of a self-talk intervention on competitive performance in young swimmers; the results were published in Journal of Applied Sport Psychology in 2014. The researchers hypothesized that a brief intervention would increase the swimmers’ plans of using self-talk strategies — something that would ultimately improve their swimming performance.

Methods
The researchers recruited 41 swimmers (average age = 14.6, SD =1.58 years), who were assigned to an intervention (n = 21) and a control group (n = 20). The two groups had similar personal and competitive characteristics and training schedules. The researchers recorded swimmers’ performance on two competitive occasions of similar importance 10-week apart. In between the two competitions, participants in the intervention group followed a self-talk training program aimed at the development of personal motivational and instructional self-talk plans for the competition. Below is an example of a self-talk cues that were placed at each swimmer’s lane in the intervention group. In addition to measuring performance, the researchers also asked the swimmers in the intervention condition how often they thought of their cues during competition. 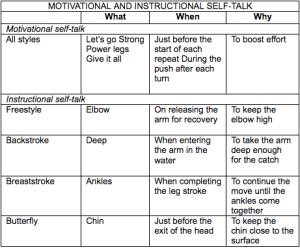 Overall, the results indicated that the self-talk training was effective: The intervention group improved their performance by 1.43%, whereas the control group’s performance remained virtually unchanged (0.05% improvement). When it came to competition, virtually all of the swimmers in the self-talk group preferred motivational (vs. instructional) self-talk strategies. Perhaps not surprisingly, some swimmers in the control group also engaged in self-talk; however, they did so in a haphazard, non-systematic way. Taken together, these findings suggest that the systematic use of motivational self-talk in competitive situations can yield promising results.

Findings such as these, which come from one of the first field tests for self-talk interventions in sports, open a range of possibilities for future research. For instance, researchers could examine the role of self-talk in competitive contexts where performance can depend on more complex factors, including teammates and player movement (e.g., tennis or basketball).

You can do it, too
Dr. Hatzigeorgiadis and his colleagues suggest that any athlete can develop and implement a self-talk plan, and that it may be most effective when created with the input of all involved parties (athlete, coach, sport psychologist). Each athlete’s self-talk plan should be personal according to his or her needs and preferences. In terms of concrete step, the researchers note that athletes should get educated on the use of self-talk, then practice to become familiar with the technique; finally, they should train consistently using their personal competitive self-talk plans. For more information about using self-talk in sports, see here: http://www.psychologicalscience.org/index.php/news/releases/thoughts-that-win.html and here: https://www.psychologytoday.com/blog/imperfect-spirituality/201106/positive-self-talk-can-help-you-win-the-race-or-the-day.