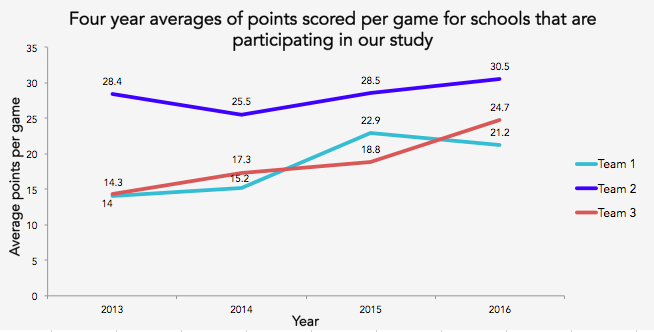 There’s an old adage in psychology that says, “the best predictor for future behavior is past behavior.” This formula pretty much sums up how sports analytics works: analytical minds compile players’ previous performances, and use them to build models to predict how they’ll perform in the future. Though this method seems to be pretty good, it’s far from the whole story.
Rob Arthur’s recent piece on 538 was an amalgamation of some of the more reliable baseball prediction outlets (PECOTA, Vegas lines, and Fangraphs projections).
Together, the predicted win totals from these sites correlate well with the actual win totals of most baseball teams (r = .60). If we do a little math, we find that previous performance explains about 36% of the reasonwhy baseball teams win as much or as little as they do. Now, if we knew 100% of the reason, we could flawlessly predict the number of wins for each baseball team; unfortunately, we’ve only got 36%. The result is that something other than previous performance accounts for around 64% of baseball team’s performance1.
So the question becomes: Can we measure other stuff to add to the already awesome previous performance prediction models to increase our predictive power? If we said “Hell yes, you can!” would you call us crazy? You wouldn’t be the first.
The future is now
First off, psychology as a discipline is quite large. There are plenty of sub-topics within psychology that can be brought to the professional sports landscape to help predict future performance. That said, research has time and time again shown that chemistry and performance are related. So, for this reason, we’ve decided to focus on this often talked-about (but not-so-often accurately measured) component of a team’s ability to stick together.
Utilizing over 30 years of research, we designed a survey to measure and increase team chemistry; we are currently implementing it with a few community college football teams in Southern California, with the aim of increasing their performance. After 3 rounds of the survey, here’s a midseason report of how it’s going:

Looking at the 4 year averages, the overall trend indicates that increasing team chemistry has played some role in improving these teams’ offenses and defenses. Before you get your scientist hat on, we know these findings are preliminary: It’s a small sample of schools — perhaps these teams would be performing this well without our survey2. There’s also another 4 to 5 games left to play for each team, so things could change by the end of the year. However, it’s a nice enough trend to get us excited about the intervention. Stay tuned for an end-of-season report to see if the results hold.

The million dollar pitch
Previous research in team chemistry has often occurred within college teams, so the mid-season results of this study are by no means revolutionary. What could be revolutionary is if professional teams begin to use this research: monitor players, build a team with players high in team chemistry, and design interventions to increase overall team chemistry. The idea is to chip away at that missing 64% of future performance that previous performance doesn’t capture.
1 This assumes our predictive models built using previous performances can’t improve, right? We’re capturing about 36% of the reason (or variance) of future performance right now in 2016, what’s to say we can’t get better in the future? True, the correlation coefficients have ranged from just over r = .8 to just below r = .3. So, at most we can unreliably predict upwards of 64% of the variance on a good year, which still leaves 36% unexplained. Predictive power has varied over the last 20 years, but the average guess is that previous performance only eats up around 36% of future performance. ↩ 2 Each team was randomly chosen and had to be a low-performing team in past. ↩
No Comments
Categories : Analytics, Psychology
← Next Post
Previous Post →