The Cleveland Browns suck, but their TV ratings don’t 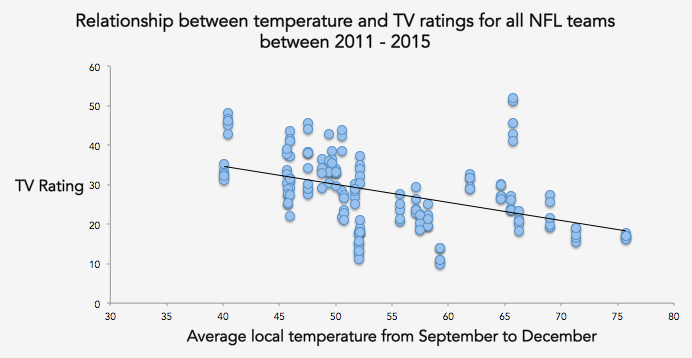 The Cleveland Browns have been a miserable football team, finishing over .500 once in the last 13 years. Yet despite their ineptitude, they’re managed to produce better TV ratings than half the league over the last 5 seasons including a top 10 TV rating in 2014. People are still watching Browns games in spite of their failures.

It’s a very simple equation for the NFL — eyeballs on their games equal dollar signs. More people watching, more money. Not that the NFL has an issue with people watching their games; Americans love our football, with telecasts averaging around 20 million viewers per game last season. And while there are undoubtedly many factors that drive NFL viewership (like fantasy participation and rising ticket prices), we wanted to take a closer look at one factor in particular: Weather.

Simply, we figured that as the season goes on, and it gets colder in many places across the country, viewership would increase.

Method
We gathered local TV ratings from the home cities/areas of all 32 NFL teams via Nielsen and Sports Business Daily for the years 2011-2015. We then matched these ratings with each team’s wins in each of those seasons, and the average local temperatures between September and December (i.e., the NFL regular season). To look at the relationship between these three variables (TV ratings, wins, and average temperature), we used multiple regression. 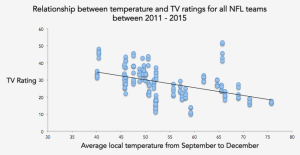 Results
Perhaps not surprisingly, a team’s current season wins accounted for about 25% of team’s local TV ratings 1. Likewise, the number of wins a team had the prior season accounted for an additional 9% of the local ratings 2. News flash: People want to watch teams that win games.

More to our hypothesis, though, for every 1 degree drop in average temperature between September and December, TV ratings go up by .3343 above and beyond accounting for current and previous season wins. In other words, when we control for win total over the previous two seasons, decreasing temperature accounts for another 10% of the increase in TV ratings.

What’s it mean?
This is not to say that temperature is the sole cause of any change in NFL ratings; indeed, there are plenty of other explanations (beyond wins) including a team’s legacy, marketing strategy, or player popularity to name a few. But the cold weather theory make a lot of intuitive sense — with an average temperature of 47.6 degrees, maybe fans in Cleveland don’t have anything better to do?

It might be a stretch, but it could also be incentive for the NFL to move north of the border.