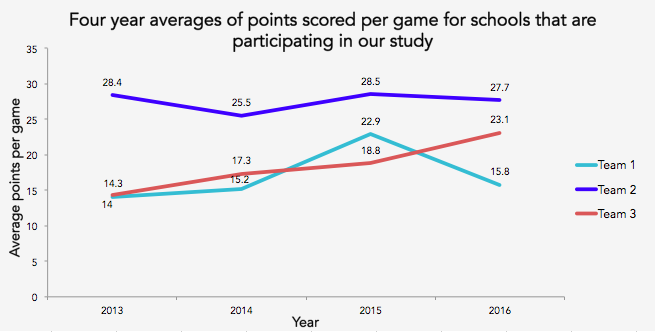 What do you do when you’re stuck on a shitty team and you can’t leave?
Comparing yourself to a better team’s performance won’t help your self-esteem; in fact, it might make you feel worse about your team and its prospects. But, what if, instead of focusing on wins and losses, you emphasize nonperformance aspects like academic performance, good looks, or general awesomeness? Research suggests that these comparisons should engender team-wide feelings of positivity, leading to a greater sense of identity, plentiful team chemistry — and, ideally, increased performance.
—
In our last article, we gave a midseason report on the intervention that we were in the midst of conducting aimed at implementing some of these ideas. With the overall goal of increasing these teams’ performance, we built a team chemistry intervention, and administered it to three Southern California college football teams via a series of surveys throughout the season.
Our initial glance at the data showed promising returns — a slight trend on offense, with an increase in points scored per game; and a stronger trend on defense, with a decrease in points allowed per game. Now that all the results are in, we thought an update was in order.
A little of this, a little of that
After 5 rounds of treatment, the final results are a mixed bag of the study are a mixed bag. First, the offensive trend seems to have washed out: all three teams’ points scored per game were on par with their four year averages.

More encouragingly, the defensive trend became a bit less dramatic, but remained consistent: Two of the three teams that participated in the study showed four year lows in points allowed per game.

Some is good, more is better

These results represent an encouraging start. But to really increase our confidence in claims about team chemistry leading to better performance, we’ll need much more evidence. Fortunately, that’s exactly what’s in the works — just like Kahneman and Tversky, we’re looking to be sports analytics disrupters.