It’s All About the Team

Editor’s note: This article is a continuation of our series focused on communicating findings from peer-reviewed sports psychology research to the masses. At the end of the post, you can find additional information, including a link to the original research article.

It’s an idea that makes logical sense: A team’s shared beliefs, perceptions, and expectations of achieving should contribute to its overall success. In fact, the New York Times Magazine recently featured a piece on the organizational culture of the Golden State Warriors and the influence it has had on their remarkable success over the past two years.

But just because an idea seems valid on its face, it doesn’t necessarily have scientific backing. Indeed, most of the research in sports psychology has focused on the impact of leadership emanating from players and coaches — not from management. As recently as 2009, there wasn’t any rigorous research examining the ways in which performance leadership and management influence elite athletes’ performance.

To address this scientific gap, Drs. David Fletcher and Rachel Arnold of Loughborough University explored perceptions of the most effective (i.e., “best-practice”) ways for leading and managing teams in preparation for Olympic competition.

Methods
The researchers recruited 13 national performance directors (NPDs), with an average age of 49, who had worked in elite sport between four and 35 years (average = 20). To complete the interviews, the authors used a specially developed guide aimed at assessing perceptions of best practice for leading and managing teams preparing for Olympic competition.

Interviews ranged in duration from 32 to 103 minutes (average = 54), and were digitally recorded. To analyze participants’ interview responses, the researchers conducted a thematic analysis, which allowed them to identify key components of performance leadership and management. 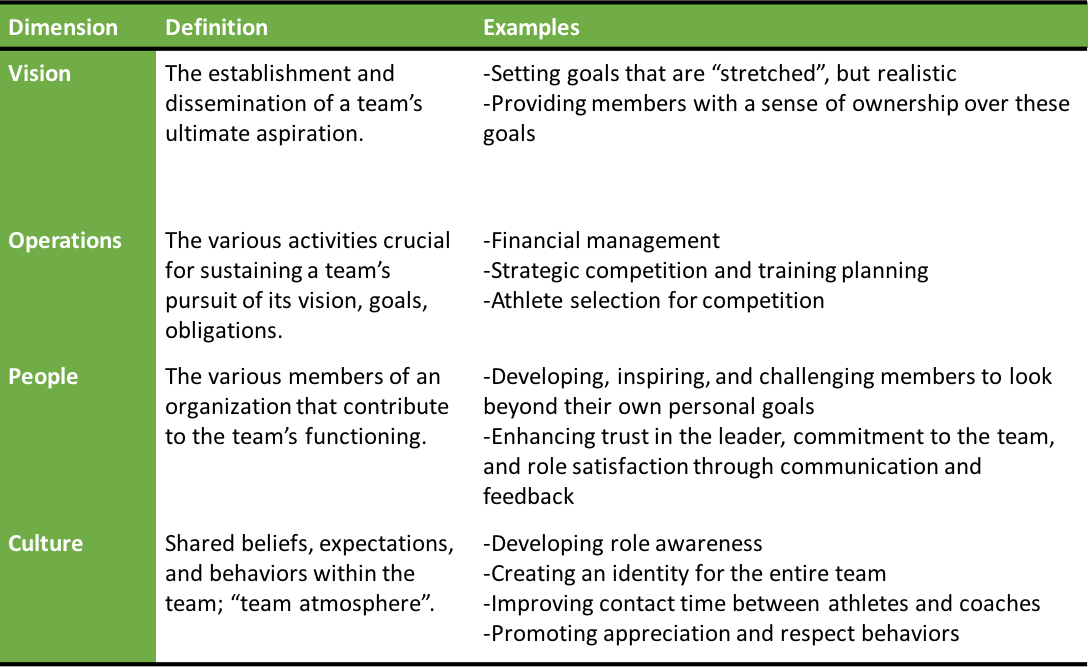 Together, these categories suggest some best practices for leading and managing elite sports teams: Development of a vision, management of operations, leadership of people, and creation of a culture.
Conclusion
Drs. Fletcher and Arnold suggest that a main implication of this study is the need for sports psychologists to examine performance from multiple perspectives — to go beyond the player-coach dyad. Dissonance between the various levels within an elite sports organization is likely to influence performance negatively. So, the need for consistency, balance, and stability is crucial to optimal functioning for individuals, groups, and even organizations.

A team is a living, breathing organism; it can take on a mind of its own. To account for this, teams must ask themselves who or what actually makes up a “team” and to what extent do these individuals, entities, or processes influence the ability for a team to realize its vision?

The citation for the article on which this post is based is below:
Fletcher, D. & Arnold, R. (2011). A qualitative study of performance
leadership and management in elite sport. Journal of Applied Sport Psychology, 23, 223-242.