Which NFL teams make the best first round draft picks…and does it even matter? 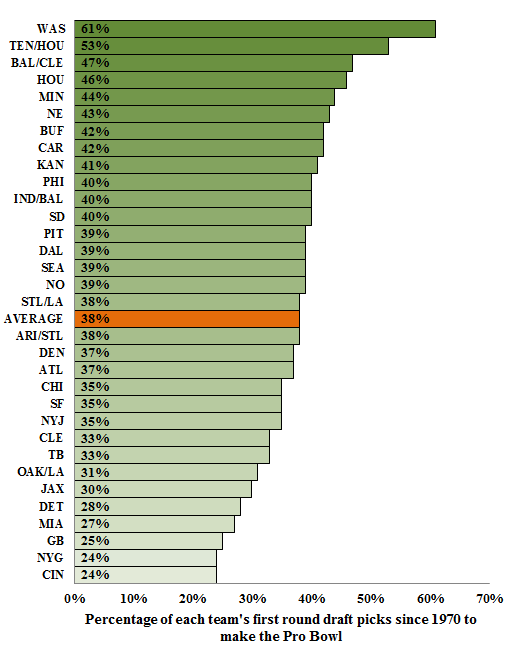 The NFL draft is upon us once again. All 256 picks will be heavily scrutinized, but none more than the 32 first rounders expected to be game changers for their respective franchises. As we wrote previously, first round selection does not always guarantee success, but it does warrant a lucrative contract. Clearly, it is in teams’ best interest to invest their first round draft picks wisely. Given this, we wanted to know: which franchises have had the most success drafting quality NFL players in the first round? In other words, which teams have a good track record of drafting players who end up actually deserving their first round status…and first round paycheck? What We Did To determine which teams have made the most of their first round choices over time, we examined each franchise’s first round selections since the completion of the AFL/NFL merger in 1970. We then determined the percentage of first round choices for each team that were selected to the Pro Bowl at least once in their career. It is important to note that while the first joint AFL/NFL draft was held in 1967, each league held its own All-Star game until 1970. So, despite the possibility of looking at first round draft picks since 1967, we limited our analysis to draft classes from 1970 – 2013. Another thing to bear in mind is the number of drafts in which each team has taken part. Franchises have been around for varying lengths of time. For instance, the Packers have been in the NFL since 1921, while the Seahawks and Buccaneers came into existence in 1976; the most recent NFL team, the Texans, first participated in the draft in 2002. Thus, we used the percentage of each team’s first round picks selected to the Pro Bowl to adjust for the fact that older franchises have had more first round draft picks — and thus more chances to pick Pro Bowl players.

What We Found
Note first that on average, 38% of first round picks have made at least one Pro Bowl. That finding alone is interesting — one might presume that a greater portion of first rounders, the cream of each draft crop, would go on to make the Pro Bowl. When dishing out $61 million dollars for JaMarcus Russell, we’d bet (or at least hope) that the Raiders would expect a substantially better than one-in-three chance that he would make one Pro Bowl in his entire career. Perhaps the relatively low overall success rate speaks to the inadequacy of the scouting combine or NFL personnel’s continued psychological over investment in first rounders.
No, that’s not a typo — the team that has fared the best, by a large margin, in terms of selecting eventual Pro Bowlers in the first round is the Washington Redskins. Nearly two-thirds (61%) of the Redskins’ first round draft picks since 1970 have gone on to the Pro Bowl, including Hall of Famers like WR Art Monk and CB Darrell Green.
While this may be surprising given the Redskins’ lack of recent success, it’s important to remember that they won three Super Bowls (XVII, XXII, and XXVI) in a 10-year span. It should also be noted that the Redskins did not have a first round draft pick throughout the 1970’s. Despite this, they’ve still had 23 first round picks between 1970 and 2013 — more than the Texans, Jaguars, Panthers, and Browns — and 14 of these players have gone on to make at least one pro bowl. The Redskins likely won’t have an opportunity to build on that number in 2014 — their first round pick belongs to St. Louis (although we should note that with that traded pick, the Skins drafted QB Robert Griffin III, who made the Pro Bowl as a rookie in 2012).
Less shockingly, at the other end of the spectrum, fewer than one-quarter (24%) of the Cincinnati Bengals’ first round picks go on to become Pro Bowlers. While the Bengals have taken some great players in the first round, including Hall of Fame OT Anthony Munoz and, more recently, WR AJ Green, they have had many more misses. For example, many first round picks include busts like LB Reinard Wilson, RB Chris Perry, and WR Peter Warrick — none of whom made the Pro Bowl.
Does Your First Round Draft Pick Matter?
Seeing teams like the Giants, Packers and Dolphins (who have won a combined 10 Super Bowls) also at the bottom of this list led us to ask another question: Does drafting future Pro Bowlers in the first round actually translate into Super Bowl wins? 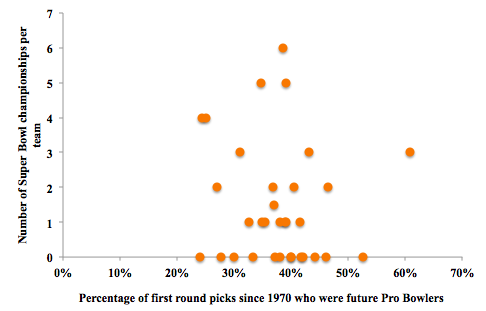 As can be seen in the scatter plot, there is no apparent relationship between the percentage of future Pro Bowlers chosen in the first round and Super Bowls won. Interestingly, the draft success rates for the three franchises with the most Super Bowl titles (Pittsburgh, 39%; San Francisco, 35%; and Dallas, 39%) are around the league average of 38%. This effect remains the same when considering each team’s Super Bowl win rate (i.e., championships won per years in existence). As such, it appears that there is a distinction between the ability to select good individual players and building a great team.

There’s plenty of talent in this year’s NFL draft. Players like DE Jadeveon Clowney, LB Khalil Mack, WR Sammy Watkins, and everyone’s favorite subject of discussion, QB “Johnny Football” Manziel, are just a few of the highly touted prospects who are considered locks to go in the first round. A few of the players chosen in the first round of the 2014 draft are destined to become Pro Bowlers; maybe a few of them will even end up as Hall of Famers. But in the end, what’s more important — choosing super talent or choosing Super Bowl winners?
1 Comment
Categories : Analytics
← Next Post
Previous Post →