Thrown for a Loop: Passing Attempts are Up, Interceptions Aren’t

Even to the common fan, it seems clear that NFL offenses are increasingly relying on the pass to rack up yards and points. Peyton Manning, Tom Brady, and Drew Brees set one record or another each year — or even each week. What’s more, recent rule changes1 have resulted in a greater emphasis on calling defensive illegal contact and holding, two penalties that affect defensive backs’2 ability to cover pass plays.

With all of this in mind, we wanted to know: Have teams actually been passing more? If so, how might this affect passing statistics like average pass attempts per game, average passing yards per game, and average interceptions per game? 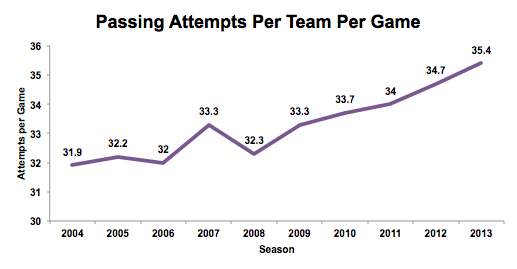 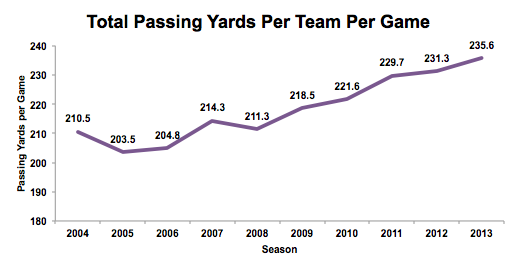 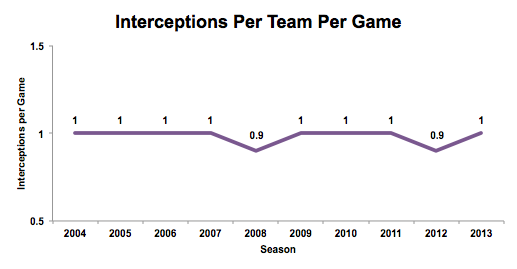 Where’d All the Picks Go?

Increasing completion percentage. As one might suspect, as yards per attempt have fallen, teams’ completion percentage has improved. Shorter passes are often easier to catch than long throws. More short passes should lead to more completed passes and fewer interceptions.

As many observers4 have noted, the NFL game is constantly evolving. The trends discussed here suggest that teams are passing more often and completing more of the passes they attempt, but that these passes are going for shorter distance. Not only do we see evidence of this in quarterback statistics, but also in the increasing prominence of slot receivers5 and the greater value placed on pass catching running backs6.