Rookies are risky; no one knows for certain how they will play once they get to the NFL. One way to reduce this risk is to understand that draft position and combine performance are not guaranteed indicators of success in the NFL.

To further minimize this risk, it is essential that teams quickly assess a rookie’s ability once the season starts. Simply, because each play is precious, it is important that teams decide whether a rookie is worth giving the ball to. This situation begs the question: How many opportunities does a rookie running back or wide receiver need for his team to have a clear idea of how he will perform for the rest of the season? Malcolm Gladwell wrote about the concept of 10,000 hours1, the specific point at which someone becomes an “expert” at a given craft. It appears that a similar cutoff point may exist for rookies: 25 opportunities for running backs and 15 opportunities for wide receivers.

In other words, it appears that after 25 and 15 opportunities, respectively, we know what we should expect to get out of rookie running backs and wide receivers for the rest of the season.

To come to this conclusion, we analyzed the relationship between total opportunities and performance using rookie year data for running backs and wide receivers from 2008-2012. 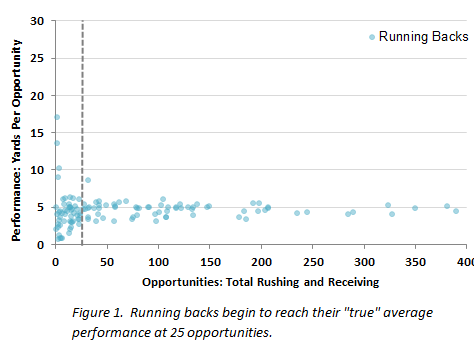 Figure 1 shows opportunities on the horizontal axis, and rookie performance on the vertical axis. Take a look at the dashed, vertical grey line. Notice how scattered the blue dots (players) are to the left of the line, and how they become more concentrated to the right of the line. Between 1 and 25 opportunities, players’ yards per opportunity are as low as .80 yds/opp, and as high as 17 yds/opp. Suddenly, right around 25 opportunities, something changes — rookie running backs begin to cluster between 4 and 6 yds/opp (for those of you interested, that outlier is Felix Jones who averaged 8.63 yds/opp on 32 opportunities in his rookie campaign). Interestingly, we see that there is not much of a difference in performance between players with 26 opportunities and 390 opportunities.

A similar pattern emerges with wide receivers. Again, draw your eye to the dashed, vertical grey line in Figure 2. Just like for running backs, the orange dots (players) to the left of the line are very spread out; on the right side of the line, players begin to cluster closer together. Between 1 and 15 opportunities, players’ yards per opportunity are as low as .67 yds/opp and as high as 26 yds/opp. However, around 15 opportunities, rookie wide receivers begin to cluster between 5 and 10 yds/opp. On average, there is little difference between players with 16 opportunities and 138 opportunities. 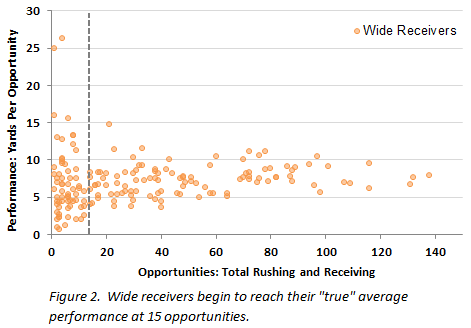 Throwing cause into the wind

As any good scientist would point out there are multiple ways to interpret these results, it is a bit of a chicken and the egg problem. For one, it could be that more chances may lead to better average production. It might be that rookie running backs and wide receivers “find their legs” or adjust to the NFL style of play at 25 and 15 yards, respectively. On the other hand, it could also be that guys who get more yards are given more opportunities. Gain lots of yards your first few opportunities, you will be rewarded with more chances to produce.

So what does this cutoff mean?

After a rookie running back or wide receiver has touched the ball 25 and 15 times, he has most likely reached his true potential (at least for his rookie season) — either he’s a dud or a stud. After these cutoff points, the amount of new information a team will learn about a player on each successive carry drops off dramatically. Will teams learn something new about a player every time they’re given a chance to make a play? Absolutely. But how much they learn will diminish dramatically after these cutoffs. If teams are interested in minimizing their investment risk, look no further after these cutoffs — they represent a decision-line for teams.