In this year’s NFL draft, the Rams traded up for the first overall pick and are faced with a decision not so dissimilar from the one the Bucs dealt with last year. The Rams’ decision boils down to two QBs: Carson Wentz, from the FCS North Dakota State Bisons and Jared Goff, from the Pac-12 California Golden Bears. Analysts have already given this debate a lot of hot air — Wentz has all the physical tools; Goff’s the headier player1. But what if there is something else that the Rams should consider? Something that was staring them right in the face?

In their new book, This is your Brain on Sports2, Jon Wertheim and Sam Sommers conducted a study indicating that based just on anonymous headshots, people rated quarterbacks as stronger leaders than linebackers or wide receivers. Wertheim and Sommers also highlight research suggesting that some people just look like leaders, and that this look of leadership is related to success: CEOs with the look of a leader were heads of successful companies, and Politicians with the leadership look won more elections3. What’s more, in their own research, Wertheim and Sommers found that NFL QBs who looked like leaders happened to be more successful than those who did not.

What’s all this have to do with the Rams’ decision between Wentz and Goff? Given the ambivalence among experts about who the Rams should take, we thought that using Wertheimer and Sommers’ technique to assess Wentz and Goff’s leadership strength would provide greater clarity. So, we replicated their study, but instead of comparing QBs to other positions, we examined the top 15 QB prospects4 in this year’s draft class.

We wanted to know: How do people who don’t recognize the 2016 QB draft class rate the players’ inherent ability to lead based solely on a picture of their face? And, of greater interest to the Rams, who do people see as a better leader: Wentz or Goff? 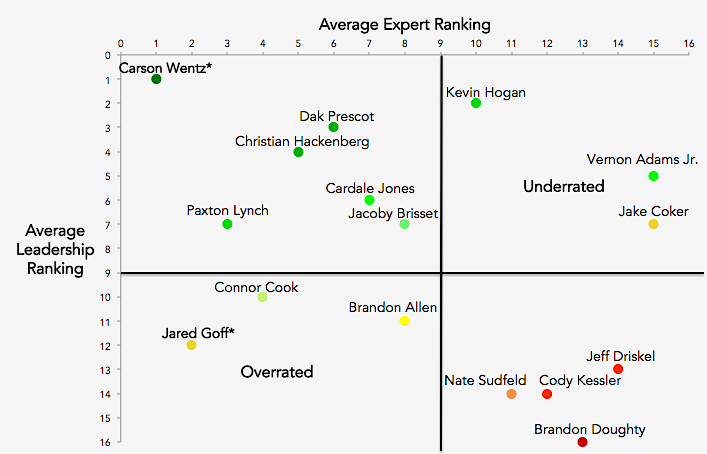 **We converted the leadership skill rating into a ranking (1-16).
So, how did the leadership ranking match up with the average ranking from our experts? The first overall matched up quite well, as Carson Wentz (m = 6.55, 1st ranked leader)5 scored the highest on the leadership score; he’s really looking the part of a first overall pick. But most shocking of all was Jared Goff (m = 5.06, 12th ranked leader). Many experts had Goff ranked as the top QB in the draft, but our raters pegged him as the 12th highest in terms of leadership skill — yep, he’s looking a bit overrated.

People rated Kevin Hogan (m = 6.48, 2nd ranked leader) as the second strongest leader; he’s now padding his Stanford education with the look of a leader, and a claim of “most underrated”. Say what you want about Western Kentucky, but Brandon Doughty (m = 4.02, 16th ranked leader) doesn’t have the look of a future QB in the NFL. He was the only QB to be rated below a 5, and was over a full scalar point below the average (m = 5.30).

Lead the way
How much stock should you put into these leadership rankings? They certainly are not perfect, but they deserve your attention. There’s plenty of research from other domains (recall CEO’s and politicians) and the NFL (higher leadership rankings related to success as a QB) suggesting that this stuff is important. This leadership rating might not pick the next Tom Brady, but if you’re split between two quarterbacks of equal expert rankings, the leadership ranking might tip the scales.
1 http://www.cbssports.com/nfl/draft/nfl-draft-scout/25562559/nfl-draft-goff-or-wentz-seeking-a-qb-with-basic-instinct↩ 2 Wertheim, L. J. & Sommers, S. (2016). This Is Your Brain on Sports: The Science of Underdogs, the Value of Rivalry, and What We Can Learn from the T-Shirt Cannon. New York: Crown Archetype.↩ 3 http://journals.sagepub.com/doi/abs/10.1177/1532673X14532825↩ 4 The top 15 quarterbacks were averaged from a number of sources: Pro Football Focus, ESPN, Mike Mayock, walterfootball.com, Eric Edholm of Yahoo Sports, Dan Kadar of SB Nation, Bleacher Report, CBS.com, NFL.com. There are technically n = 16 quarterbacks in this study because there was a tie at #15↩ 5 Participants were shown a photo of one of the top 16 quarterbacks in the draft. The picture was from the neck up with the face uncovered. Participants were first asked if they recognized the quarterback’s face. If they did not recognize the person in the photograph they were asked to “rate this person’s leadership ability” on a scale from 1 to 10↩
No Comments
Categories : Analytics, Psychology
← Next Post
Previous Post →